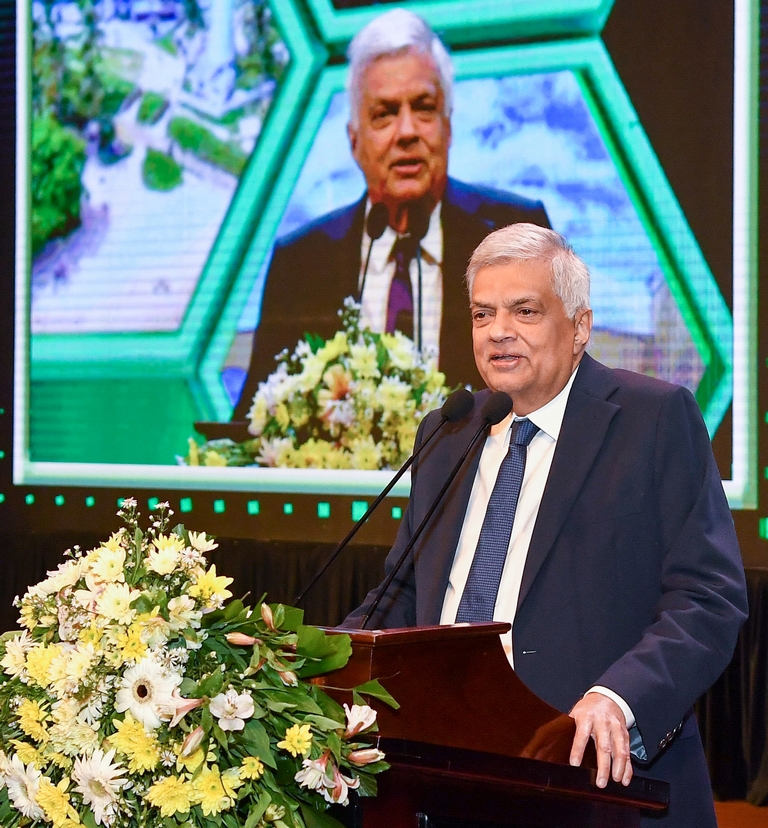 COLOMBO : President Ranil Wickremesinghe said here on Thurday, Jan.19 that “ Its time for reconciliation and for peaceful coexistence.”

The president was addressing more than 1,000 delegates at a conference organized by the Al Ceylon Jamiyyathul Ulama (ACJU) 100th Anniversary celebations held at the BMICH on Thursday.

“ Any religion should guide their respectiive community to modernity and adapt to the modern world.”

He invited the Muslim Cmmunity to join hands with the Social Justice Commission to fins solutions for the issues faced by the Muslim Community nd urged all communities to unite as true Sri Lankans as the country celebrates its 75th Anniversary of Independence this year.

The President emphasized that despite the varios religions having diffent beliefs, no religion promotes hatred.

He pointed out that the past 75 years was spent on the various communities fighting one another and appealed all Sri Lankans to cast aside differences and unite as citizens of one Sri Lanka as the country celebrates its 75th Anniversary of Independence.

Following is a part of the  speech delivered by President Ranil Wickremesinghe:

.“You might remembe the start in 1922 when the world was undergoing a vast transformation after World War One, which included the abolitionof the caliphate. And there was in India a big movement to restoe the caliphate. But in Sri Lanka, you also form the ACJU at te same time as to what was going to be the single Muslim thoght and not theology which is the debate that has gone on.

So today you are still faced with some of the issues that were there at that time. Firstly, we are in a different world with about 150 nations that were not there in 1922. We are in different century with the development of science and technology and the development of political rights. It is in this backgrund that we have to look at the future of Muslims in Sri Lanka.

Firstly, not only Islam, but al religions are looking at what is the essence of religion, what is he pure meaning of religion and how we connect with the moern world. Now, this is an issue that all of us face, but it does ot mean that religion, can go back to the past. The essence f religion must be applied to the past, the present and the future.

All of us must live in the present and look at the future. Past is useful to look at what is the essence of our religion because n religion is a religion of hate. It can’t be a religion of hate and it must have compassion. And especially for Islam or those who preach otherwise, a religion which at that time, the last of th great religions, which acknowledge the same God as the Jews nd the Christians, cannot be by any means a religion of hate.

Each religion will try and must preach its religion to everyone the believers and the non-believers. But preaching to non-believers doesn’t mean that they are the eneies of any religion and religion itself is now going through may, many disputes. You find not only in Islam, it is a big argument and discussion that’s going on in Islam as to what is future, but even in the other religions, you look at the Holy Catholic Chrch, the teachings of the Holy Father are being challenged by some of the more conservative members of the Catholic Church.

The best would be th university that we have established in the majority Muslim area, the south eastern area.And I am happy that Madam Ashraf got a plaque for her own acievements as a woman. She must get it. But I must also aknowledge the role played by th late Minister Ashraf in establishing the University.What is that going to be? It should be a modern university. It hould b a more modern unit with all thoughts. Do you want to have a mdern university that we, the government, will back? If you try to confine it only to the Muslims, you might suffer the same fate as the Buddhists and Pali University faced. So keep that in mind

We have to accept and we have to go ahead. I see even here the Muslim community is undergong those changes, discussing those changes. The MMDA is on of the man issues, a dispute that goes on in a very civilized manner where those who are for it and against it will argue andwant to meet on nogamous or whether you could have pluralstic marriages

The other day, I saw some Muslim children demonstrating on the MMDA, which is not on. But that is really violating the law about the care of children. If the adults want to demonstrate that’ another matter but not children, they should be kept out of it

Fonterra to give milk powder to 70,000 low-income families
Previous Post
ACJU is committed to serving Sri Lanka for unity, security and development of the nation- As-Sheikh Rizvie Mutfhi