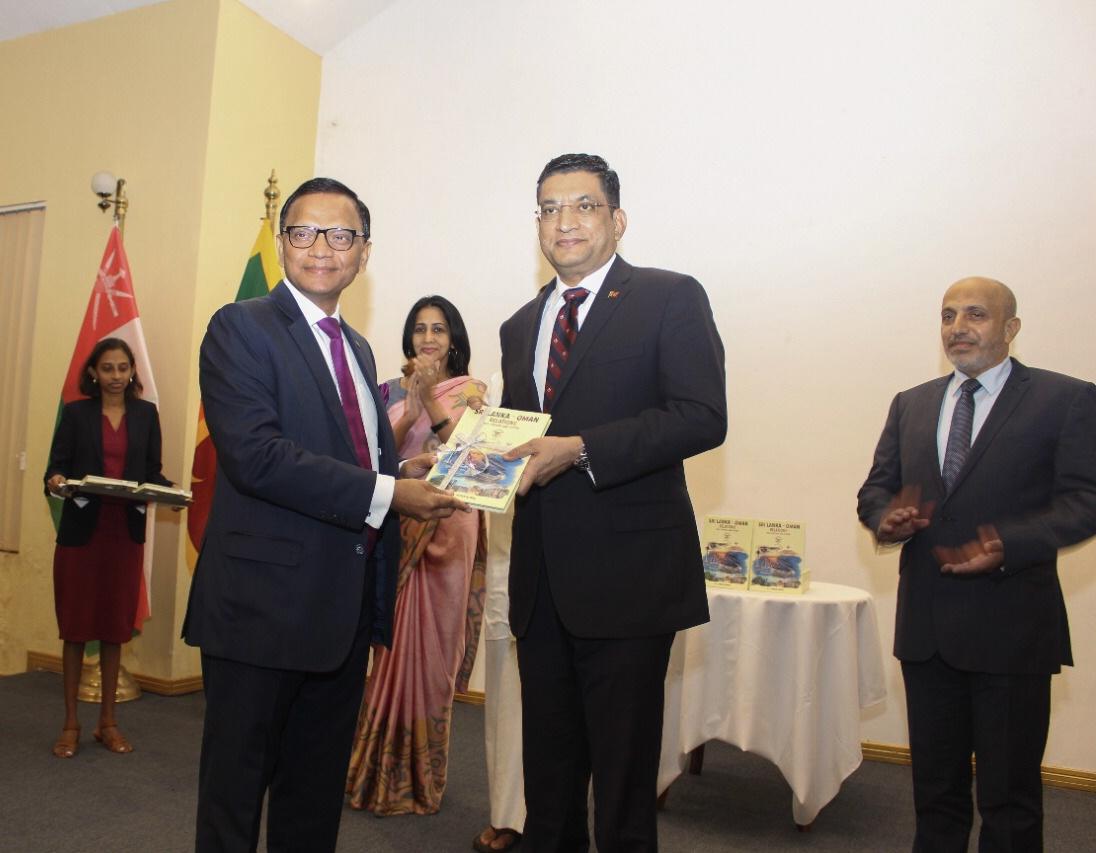 COLOMBO: The book on  “Sri Lanka – Oman Relations: Past, Present, and Future” authored by Ambassador O. L. Ameer Ajwad, Director General of the Performance Review & Implementation Division of the Ministry of Foreign Affairs and the former Ambassador of Sri Lanka to the Sultanate of Oman was relaunched in Colombo on Jan 12 .

The Lakshman Kadirgamar Institute of International and Strategic Studies (LKI) in association with the Ministry of Foreign Affairs of Sri Lanka and the Embassy of the Sultanate of Oman in Sri Lanka hosted the re-launch of the book.

The event began with the welcome address by the Actg. Executive Director of LKI Ms. E.A.S.W. Edirisinghe.

Delivering the opening remarks during the event State Minister of Foreign Affairs of Sri Lanka Tharaka Balasuriya expressed his deep appreciation for the effort of the author of the book who was able to complete a daunting task of authoring a book amidst his equally challenging ambassadorial duties. Minster Balasuriya also highlighted the author’s advocacy of building greater trade ties by connecting the prominent chambers of commerce in Sri Lanka and Oman. State Minister further stated that although the book was published to mark the 40th Anniversary of the formal diplomatic relations between Sri Lanka and Oman, the people to people contacts between the two countries go back to the mists of history as testified by the author. State Minister Balasuriya also highlighted the viability of connecting ports of Colombo and Sohar of Oman by a direct feeder service with a view to creating a trans-shipment hub for the respective regions as proposed by the author.

Gracing the occasion as the chief guest Minister of Foreign Affairs Ali Sabry, PC pointed out that the book authored by Ambassador Ameer Ajwad had set an example to preserve the intuitional memory of the Sri Lanka Mission and also proposed a roadmap, through an envoy’s personal experience, for future cooperation between Sri Lanka and the Sultanate of Oman. Minister Sabry also recalled Sri Lanka’s longstanding bonds of friendship with the Arab world and articulated that one of the priorities of the Government of Sri Lanka’s foreign policy was to further elevate relations with the Middle Eastern countries.

Speaking during the occasion Ambassador of the Sultanate of Oman stated that the book by Ambassador Ameer Ajwad was a comprehensive review of the collaboration between the two countries and that it was not just a reference for the diplomatic community but also for society at large notably the private sector, researchers and academia. He further stated that the book was the first ever publication of its kind on Sri Lanka and Oman relations and that it would serve as a blueprint for the future bilateral cooperation.

The Book was reviewed by Dr.  Ranga Kalansooriya, political and media analyst, who stated that the book was a timely initiative and that it suggests a way forward for greater connectivity and closer economic cooperation between Sri Lanka and Oman while recalling deeply rooted historical bonds between Sri Lanka and the Arab world in general and between the two countries in particular. He further stated the Chapter V of the book provides solid proposals together with ideas suggested by experts and professionals related to the identified sectors which add value to this Chapter.

Addressing the gathering author of the book, Ambassador Ameer Ajwad underlined that the primary motive behind this book was to create awareness of potential opportunities available in Sri Lanka as well as in Oman in identified areas of mutual interest by providing vital information from the official sources of both countries for deeper engagement. He also highlighted the success stories achieved by the Embassy of Sri Lanka in Muscat amidst challenges posed by the pandemic.

Ambassador Ameer Ajwad paid a tribute to former Foreign Minister late Lakshman Kadirgamar who held the first bilateral political consultation with the Sultanate of Oman. He also extended his gratitude to the Foreign Minister of the Sultanate of Oman Sayyid Badr Albusaidi, for offering a “foreword’ to the book as well as others who supported him for the book to see the light of the day.

The book was formally launched by Foreign Minister Ali Sabry jointly with the State Minister Tharaka Balasuriya, Foreign Secretary Aruni Wijewardane, Ambassador of the Sultanate of Oman to Sri Lanka Ahmed Ali Saeed Al Rashdi as well as the author of the book.

Ambassadors/Diplomats from West Asian countries including Qatar, Egypt, Iraq, Saudi Arabia, Iran,  former Sri Lankan Ambassadors, Senior Officials from the Ministry of Foreign Affairs, distinguished guests from judiciary, media, Think Tanks, academics as well chairpersons and representatives from leading Sri Lankan private sector companies who have business relations with Oman, participated at the re-launch of the book on “Sri Lanka – Oman Relations: Past, Present, and Future.” which is a publication by Black & White Media and Services LLC of Oman